On Facebook - South Horrington Village and The Horringtons Community Group 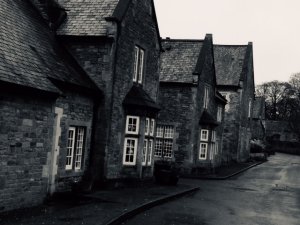 A row of terraced cottages on Gilbert Scott Road.

South Horrington is a relatively new village created in the late 1990s from the defunct Mendip Hospital that was closed in 1991.

The original hospital opened on 1 March 1848 and was built to house 400 patients and staff. The principal architect was George Gilbert Scott, who is better known for his designs of St Pancras Station and the Albert Memorial in London.

The hospital was established as a county asylum for pauper lunatics, under the County Asylums Act 1808, following campaigns by Sir Edwin Chadwick and the work of the Poor Law Commission, and opened in 1848. It was built at a cost of £38,000 by Kirk of Sleaford. The first patients were brought to the hospital from local workhouses. Some of the male patients tended the hospital's own farm which provided food for the institution. During the 1850s, within a few years of opening, the hospital was nearing its capacity of 350 and new dining and recreation halls were built. In 1867 the attics were made into dormitories. In the 1870s land adjacent to the hospital was bought to establish a cemetery which was used for the patients who died until 1963 during which time 2,900 burials were carried out. A further villa capable of holding 100 patients was added in 1882. In the 1920s electricity was installed which was followed by a cinema in the 1930s.

The function as an asylum was taken over by Tone Vale Hospital in 1897, after which Mendip Hospital provided services for long-stay elderly and mentally infirm patients.

It closed in 1991 and the building was converted into houses and flats. The main two-storey building, with attics, has a frontage in an "E" shape which is 280 metres (920 ft) long. The roofs are covered in slate and have ogee-shaped gables and finials, with stone chimney stacks. The stone chapel, which is joined to the main building by a covered walkway, is supported by two-stage buttresses and has a spire on the crossing tower. There is also a lodge at the entrance to the site.